Mr. President breaks it down with an Arab TV network about how the US and the Middle East can learn to live together. Part Two after the jump.

END_OF_DOCUMENT_TOKEN_TO_BE_REPLACED

Another edition, shouts to my boy Brandon and the homie Michelle. Haven’t watched yet but sure to be entertaining to say the least….

“Are conservative talk-show hosts eager to go on the attack, after years of defending Bush?” asks the Louisville Courier-Journal’s Larry Muhammad. The answer is clearly yes.

Barack Obama has not yet taken office, and Rush Limbaugh is already rooting for his failure. On his radio show last Friday, Limbaugh said, “I disagree fervently with the people on our [Republican] side of the aisle who have caved and who say, ‘Well, I hope he succeeds.’”

Limbaugh told his listeners that he was asked by “a major American print publication” to offer a 400-word statement explaining his “hope for the Obama presidency.” He responded:

END_OF_DOCUMENT_TOKEN_TO_BE_REPLACED

Spotted at diff kitchen. Its biting day so far. Anyway the title says it all.

You knew he would. Everyone loves Bill’s sloppy seconds…no seriously even though he is gonna get attacked all over this I think it’s a good look. Makes him look like he is ready to play nice nice with the rest of the Dems. And the hilary supporters have to love it.

I seriously thought that with the election of Obama these Al-Quaida types would chill out. But I guess hatred knows no bounds. While I’m not judging them to compare Obama to some type of house negro is insulting. Then to use Malcolm’s image while doing it? Haven’t they ever heard the Ballot or the Bullet? Seriously I’ve visited the middle east (lol) and I can tell you first hand that overall nobody wants this whole jihad thing these guys are talking about, and if they were behind the Sep 11 attacks then they are in big time violation of the code of Islam that the prophet Muhammad (pbuh) brought down from the heavens.

Better late than never I always say. I guess that applies to Obama’s presidency as well.

It’s all about the segue folks. From the Gnarls video to the Cee-Lo interview. He breaks it down about his touring, Obama, Gnarls, and the future of the Goodie.

President Elect Obama’s weekly radio address. Not really a radio in this day and age but same thing. He says he will continue to drop these once he is elected president. I think Joe Budden is gonna have some competition. Maybe he can help Nore lose some weight or get Young Bergs chain back from Trick Trick. Or maybe he can actually clean up the myriad messes left behind by W. After the jump the medias reaction to this webcast. END_OF_DOCUMENT_TOKEN_TO_BE_REPLACED

More from the DAG man. As always a good watch.  The political stuff has been kinda slow since that glorious day so this is what you get.

Obama dropping dimes on fools. We got a President with a behind the back dribble. I doubt even Clinton could pull that one. I LOVE it. It never gets old….

Out with the Old…. 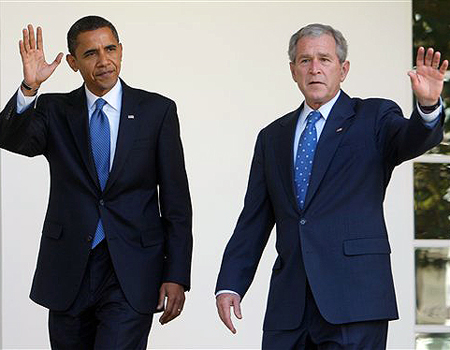 Or in the words of Will Smith: New Hotness and Old and Busted. January 20th cannot come soon enough…. read the CNN story here.

Holy shit is right! DAG does his thing with his advice to Obama. Well worth watching. as is everything we post over here but you know….

Common speaking on the election and Obama while introing his new song Changes. Video of the song coming soon as in later on tonight.

I belong up top next to Scarface and Bun.

The return of Mr. Southside himself alongside the Thugga. Houston represent. link after the jump.