No actually we still love wordpress but we have moved over to http://www.pleasedontstare.com/ so please check us there for the latest in everything.

A video made by Dallas Penn for one of DOOM’s songs off his latest album, pretty funny.

Described as being: “Seinfeld meets Yo!MTV Raps. Intelligent urban entertainment [packaged in an] animated short film birthed in the spirit of Golden Age Hip-hop.” The story needs some work but the detailing is hilariously spot-on. You can tell these cats really know and love their hip hop. [via Asya]

I’m too hungover to add more but stolen without remorse from the kitchen.

more about “This Day Sucks Demo (VIDEO)“, posted with vodpod

This is just effing awesome. From Iron Mike to Iron Man. Hit the jump for some more pics of this thing of beauty. I don’t know how much it costs but apparently it releases in July in the States.

END_OF_DOCUMENT_TOKEN_TO_BE_REPLACED

And here’s another one from facebook. This is looking better and better I must admit.

Just when this whole Kanye fish sticks fuckery died down, I stumbled across this. I have to admit, I laughed at this. Pretty interesting drawing. Yea, it is definitely a slow day today.

I don’t even like doing posts like this but let’s take a moment and celebrate the amazing work of Mr. Mortensen. You can check more of his incredible photography here. Ridiculous how many of his shots are so iconic. I included a few of my faves but hit his website up for more of the great ones work. Respect the Architect. Traveling Mercies Shawn.

END_OF_DOCUMENT_TOKEN_TO_BE_REPLACED

It’s a lot of good things going down in the DMV these days. If you don’t catch the Camp Lo show tonite then you can always make it out to the 1st Annual DC Tap Festival put on by two of my peoples, Chloe and Maud. Pleasedontstare loves the kids!!! Check the flyer above and hit them on their website right here. DMV stand up!!!

Keep it on wax, literally. It was just announced by Madame Tussauds that Snoop Dogg will be the next Hip Hop artist/icon to be displayed as a wax figure. Just like Tupac Shakur, Notorious B.I.G, Snoop will be displayed at one of Madame Tussauds’ musuems, but will be the first living Hip Hop artist to be waxed up. Snoop’s $300,000 wax figure will be decked out in his Rich & Infamous clothing line including a baseball jacket. Personally I would rather see him in this earlier wardrobe (no homo).  Snoop’s wax statue will make it’s debut appearance at the Madame Tussauds studios in London next Monday, April 20th. 4/20??… ha go figure. I wonder if he has a waxed blunt.

As seen at arrested motion. Kehinde is an amazing artist and if you haven’t heard of him then you need too. Click on his name and check out his gallery feauring beautiful portraits of Kane, Big, Salt n Pepa and quite a few others. Peep Doogie Howser in the pic after the jump. If any of our readers are in Brazil let me know how it is to see these in person.

END_OF_DOCUMENT_TOKEN_TO_BE_REPLACED

ART, comedy, FRESH TO DEATH, NEWS YOU NEED, PoliTricks, Uncategorized, VIDEOS | Tagged: right after I get my clinton tat ima get obama, riiight | 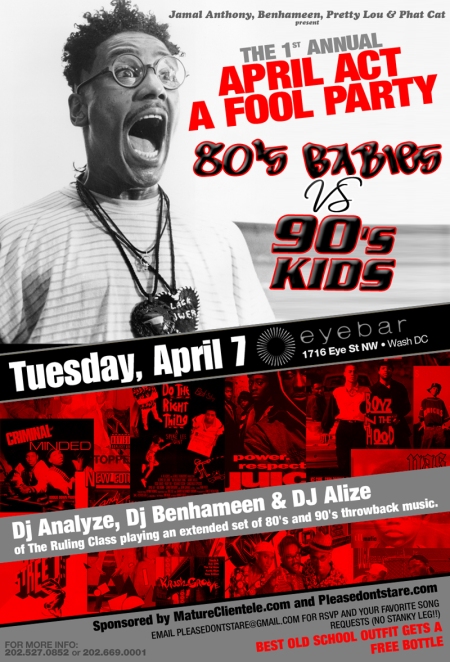 This tuesday April 7th, 2009, www.pleasedontstare.com in conjunction with matureclientele.com will be hosting the first of many retro themed parties at the eyebar. For more info hit the flyer above and or go to my facebook page, which has become a shrine of videos that if you are of a certain age will leave you stunned. Trust it was a battle last night.

ART, EVENTS, FRESH TO DEATH, hip hop, live performance | Tagged: rooftop like we bringing 88 back, they say they wanna bring the 80s back thats okay thats where they made me at |

A life size wax candle molded from Pharrell’s own hand are now on sale. Only 200 of these were made and they only can be found at Flagship stores and Colette in Paris. Each of these candles are numbered and come with a certificate of authenticity. I don’t know about dropping $110 for some candles, but I am sure some of you will probably cop.

Spotted at BBCIcecream which iswhere you can also purchase them from.

A lot of my NY peoples have seen Jimmy’s play and all say it’s pretty good. This past weekend he performed his Cam/Max B dis track “Frenemies”

Jim Jones rocked his diss track for Cam and Max B at this play which i caught this weekend. the play was good. I looked at it like a concert more or less, with a bit of dialogue. It had a lot of fat booties, and upskirt views from my seat… lol I love it!

I also remember seeing a tweet by Jim Jones yesterday saying some people were blazing at the play. SMH

Props to homie Blogxilla with the footage.