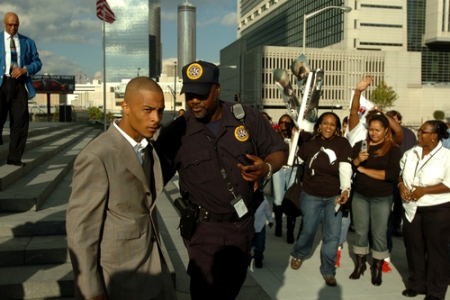 Just 4 days before Cliff heads to the slammer in Arkansas to do most of his year and a day, he has requested to appeal his prision location and to remain free while he looks for another location closer to home. Earlier this week there was a little confusion on if he was doing 2 months or his full sentence.

As previously reported, the Atlanta rapper, born Clifford Harris, is scheduled to turn himself in by no later than noon on Tuesday (May 26) to serve a 366-day sentence at the Forrest City Federal Correctional Complex’s low security facility.

It seems, however, that the decision to send him to Arkansas was based on a pre-sentencing report that described the 28-year-old as having a “serious history of violence.”

In his appeal of the decision, TI claims that prison officials miscalculated his criminal history. [ AllHipHop ]

Will this guy just go to jail already and get this over with?

This entry was posted on Friday, May 22nd, 2009 at 8:17 am and is filed under NEWS YOU NEED. You can follow any responses to this entry through the RSS 2.0 feed. You can leave a response, or trackback from your own site.

One Response to T.I. Appeals His Sentencing Location